From what I’ve gathered, there are two types of people, or rather two different approaches to planning an overland expedition.

The first are the people who are totally spontaneous, don’t plan virtually anything – they just pack, go and apply the mindset of “we’ll figure it out on the way“. Now there’s nothing wrong with it and if you are this type of person, go – but as overlanding has some additional limitations (burreaucracy, can’t take a flight…), I strongly advise to do at least some planning.

The latter are people, who like to prepare themselves ahead of the journey, at least to some extent.  This article is mostly for them.

Disclaimer: some information might be Latin America specific, but you can find useful information for any kind of overland journey here.

Car vs no car

So you decided you want to go for a long journey, or at least you’re thinking about it. If you’re reading these lines, you are probably inclined to travel in a car, but let’s go through our mind process of how we actually decided to travel “the overland way“.

This is the obvious and cheaper (initially) alternative. It’s big disadvantage is the limit of how much you can carry with you. For example, I would have to drastically reduce my photo/video equipment (which I still did, but on a smaller scale), I couldn’t take my portable printer to print photos on the spot for local people.

Another issue is safety – although car is not exactly safe as well, most of the “we got robbed” stories include public transport, messy and crowded bus stations, waiting in the line for tickets,  in a hurry, bus arrived late at night…

And there is also the fact that you would kind of have to stick to the places, where the buses do actually go. 🙂

There are some advantages, of course – you don’t have to deal with almost anything, just hop on a bus and go. Many of the buses are very comfortable and you can sleep while travelling (big advantage – take a night bus and you’ll wake up at your next destination). You will also meet a lot of people and like-minded travellers.

The other is to travel in your own car/van. This solves a lot of problems with the security and give you more freedom, as you can drive and stop wherever and whenever you want. You can pack a lot more things, or actually take somebody with you for some part of the trip. And you can also sleep in the car when the weather is bad, not mentioning you don’t have to pay for the accommodation.

I assume you’re here because you’re interested in Overlanding, so the rest will be dedicated more to this type of travel, specifically for Latin America. You can read more about the joys of overlanding here.

I am not going to talk about budget, how much it costs to travel the overland way – as it is highly subjective, as well as how to afford the lifestyle. We’ve seen couples going for as low as 10$/day, and up to about 100-150$ a day. We managed to stay somewhere around 30-50$ a day in average, all expenses included. But lets talk about practical information about finances for the travels.

First, get at least two, ideally three credit / debit cards. They should be from different banks and ready to use, both VISA and Mastercard – as they both can have some issues in various countries. Why at least two? Well, if the ATM eats your card during the weekend, you can wait for several days until you get it back (Thank you ICBC Mendoza), or you pay at toll booth and don’t get your card back (Italy), or you just plain loose or damage your card – it’s always good to have backup. You can also save some money when withdrawing from ATMs by choosing the card with lower fees.

Speaking of good banks for travellers, there are a few that are popular with travellers:

Second thing that is always good to have, is cash. US Dollars still rule most of the world and even in smaller towns, you can negotiate with someone to exchange for you if in need. For example, we once ran out of local currency and couldn’t find a gas station in rural Argentina that would not reject any of our (4!) cards – they just wouldn’t work with their terminals. In the end, we just paid in dollars with a slightly worse exchange rate. It’s good to have a few hundred dollars as backup, well hidden somewhere.

For keeping track of your finances, it’s good to have some sort of a system – either use good ol’ Excel, or an app like AndroMoney from our Useful Links article.

Planning a route can be tough and sometimes may seem unnecessary, but spending at least some time before the journey doing the homework can really pay off.

I found that it’s best to create a map, where you can put points of interest, routes or notes that you want to remember. The easiest and best would be My Maps from Google – it’s free, easy to use and share and everyone is familiar with the google maps interface. There is also a mobile app for this, and you can easily export the points of interest and add it to your GPS (like maps.me), or even display the points in the google maps app on your smartphone.

There are a few things to consider when planning your route. These are the basic ones I’d recommend to everyone:

After you’ve done this, you should have a basic idea of how-where-when. Now you can add more points and create more detailed route if you want – or not, if you want to be surprised.

Both me and Janka are the meticulous types, and because we had more than a year before we planned our trip to begin (working and saving as much as we could in the meantime), I did way more research. I spent a lot of time reading different blog articles, researching types of vehicles, different routes, taking inspiration where I could and putting everything in the map. If you want a seemingly inexhaustible source of information about overlanding in South America, here’s a list of about 100 other overlanders doing what we’ve done – most of them have their own blogs, websites, routes and stories, that you can use in your research.  Yup, feeling not so special now 🙂

Another thing I did was hosted many couchsurfers at my home, especially from the countries I intended to visit. Apart from improving my Spanish and being even more excited for the journey, I asked them to put some interesting stuff on the map for me. I was doing the same while travelling with the locals, and ended up with maps with quite a few points in the end: Map #1 – South America | Map #2 – North & Central America

Now even with best planning you can do, it’s quite probable that you will alter your plans on the way, especially if you plan to travel for a long time. We originally wanted to travel for a year, and I estimated it would be about 25-30 000km. Here’s the “expectation vs reality“: 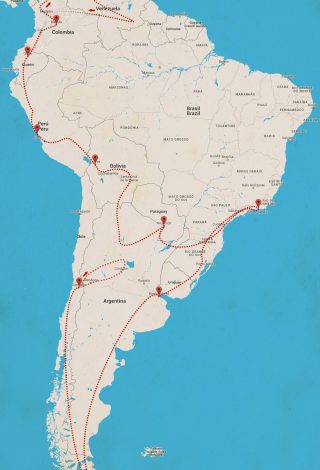 This certainly is the motto you should head for. While it’s true that you can certainly pack more than if you were backpacking, you still can’t really overdo it. Once you’re on the road, you will see that you really don’t need much – the two of us fit all of our stuff for 18 months of travelling in climates ranging from -17ºC-43ºC into one and half checked luggage (half was soft drinks & souvenirs) and 2x carry on. What we haven’t packed we just bought when we arrived.

Here’s our rough packlist for the South America as inspiration:

The rest of the equipment was mostly electronics – and since that is very individual, I am not going to list it all here, just some “honorable mentions“:

Photo & Video back up

There is a saying among photographers that goes like this: “There are only two types of people. Those who back up their photos and those who will.“

I am sure that most of the travellers will document their adventure, take photos, maybe even do a vlog. I strongly encourage everyone to back up their memories periodically during the journey – there have been countless of people who lost their memories because of a robbery, damaged hard drive or just losing a mobile phone. With the low cost of storage nowadays, this can be easily prevented – and as the memories and photos/video will be the only thing you’ll have after your trip ends, it is worth it.

A few ways you can ensure your photos will be safe:

I read many different “what would be your best advice to people planning a journey like this” polls online, and there’s one thing that always comes to my mind.

No, seriously. I know many people prefer to learn as they go and there’s nothing wrong with it, but if you’re going to areas where they speak predominantly one language like us, I wholeheartedly recommend applying at least for one course at home. You’ll continue learning on the way, but personally, I don’t believe the classic saying “it’s better to learn on the road”. While you’ll definitely learn and improve on the road, the grammar will likely be bad and you will not understand almost anything for the first few months. Because of the Wedding Travellers project I’ve planned for South America, we’ve been learning Spanish for 7 months before actually leaving on a trip.

Now that might be overkill for most of the people, but even after the first course, we were able to hold a basic conversation with almost anyone. And by basic conversation, I mean a real conversation – not hand signals + talking about the weather and hello/thank you only 🙂 Actually speaking the language has probably been the best decision we could’ve made before the trip – it is night and day difference if you can actually talk to the locals about anything you want. You get to know the culture a lot better and the locals are extremely appreciative of anyone who took the time and learned their language. It also made navigating, asking for directions, bureaucracy and just living in general much, much easier. Not mentioning that while most of the travellers use the “pretend not to speak the language and they will get bored after time” strategy when dealing with corruption on the road, I used the “explain the officer why he is wrong and that you will not pay anything to him” strategy instead. 🙂

We received many compliments about our Spanish, most of the times with a surprise in their eyes when we told them we’ve learned it back home – and it was a great conversation starter, too. Thanks to the good spanish, we could develop more meaningful relationships with the locals, especially the Couchsurfing hosts who didn’t speak any English – and we still keep in touch 🙂

If you have some time, go for it. Language is a skill that will pay for itself a million times over, and it will transform your experience.

Before leaving for you big adventure and saying goodbye, there are a few things you might want to do.